The Borough of Hammersmith and Fulham lies in the western parts of the British capital and is classified as an inner borough. It spans over an area of 16.40 square kilometres and is one of the smallest districts in England. According to the latest numbers, Hammersmith and Fulham has an estimate population of 180.000 people and a density rate of 11.000 people per square kilometre. The borough is among the most visited areas in the country, as it is the location of numerous world famous landmarks, theatres, parks, schools and neighbourhoods.

The lush green area of The Scrubs

The district of Wormwood Scrubs is also shortly known as The Scrubs. It sits in the northeastern corner of the borough and is one of the greenest areas in Hammersmith and Fulham. The local eponymous park is the largest parkland in the borough and spreads over 200 acres of lush green lands. Some parts of the park are recognised as Local Nature Reserves and are home to numerous species of reptiles, birds and insects. The Queen Charlotte’s and Chelsea Hospital is arguably the most prominent healthcare facility in the district. Founded in 1739, the hospital has been subjected to several expansion and remodelling projects throughout the years. It is affiliated with the Imperial College London and specialises in maternity, women and children’s care. The area is highly desirable due to its calm character and more and more people are moving to it by using the professional man and van services in Wormwood Scrubs of Monster Man and Van. Newcomers prefer to delegate their removals to licensed contractors, as they have the needed tools and materials to properly pack, load and haul their belongings.

Shepherd’s Bush is an area that is located in the northern parts of Hammersmith and Fulham at about eight kilometres from the junction of Charing Cross. The district is identified as a major metropolitan centre in the London Plan and therefore is one of the most important districts of the borough. Shepherd’s Bush is heavily associated with the Queens Park Rangers Football Club, as it is the location of Loftus Road, the team’s home ground. The stadium dates back to the early 20th century and since 1917 has been used by the football club (1932 is the only year during which Queen Park Rangers did not play at Loftus Road). The sporting venue has a maximum capacity of 19.002 seats. The area has its own tube station, which was opened in 1900 and serves the London Underground, National Rail network and London Overground. According to the last statistics, it provides transportation services to almost 23 million people on an annual basis.

A district still in development

The district of Old Oak Common has a population of about 9.000 people and is situated in the northernmost parts of the Borough of Hammersmith and Fulham. Until the mid-19th century, the area was a popular pig farming centre. The district was developed with the arrival of the railway and today is home to a large number of railway depots, including the Old Oak Common TMD. The area is currently subjected to a major regeneration project, which included the construction of new residential and commercial buildings. Experts believe that this will lead to an increase of the local population are more people will choose to reside in the district. Newcomers can easily relocate to the area by contacting Monster Man and Van and using their licensed Old Oak Common man and van services. 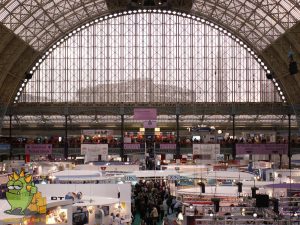 West Kensington lies at about six kilometres from Charing Cross and is home to the Olympia Exhibition Centre, which is undoubtedly the most famous landmark of the area. The event venue was established in 1886 and in 2013 was the subject of a major renovation project. It was designed by Andrew Handyside and Company and has a capacity that ranges from 4.000 to 10.000 people. Throughout the years, the exhibition centre has hosted numerous notable events, such as: