Hounslow is one of the 33 official boroughs of London. It lies on the south of the River Thames on a stretch of an area that starts near Central London and ends with the border of the metropolitan area. At the present moment, it has been estimated, the population of the borough of Hounslow is 269 100. The main area here is, of course, the eponymous town giving its name to the borough, but that does not mean there are no other districts that are deserving of your attention.

The first district we would like to talk about here is different from most places in London you are used to hearing about. There are not many famous people whose names are associated with the district of Lampton. Nor are there great historic landmarks that attract the attention of visitors from all corners of the globe. Lampton is in many ways a typical suburb in all the best senses of the word. Here you can enjoy life away from the hassle and stress of the big city. You are going to be near the urban centrewhere most work and entertain themselves and taste it if you’d like, but you will always have a peaceful and well-guarded community to come back to.

Lampton contains a number of houses from the 19th century, but most of it was developed after the extension of the Piccadilly line of the London Underground. Today, the main retail area here is Lampton Road. Lampton School is a good place to send your children too, and if you are longing for some nature, Lampton Park is right in the vicinity. And remember, if you are looking for a reliable man and van in Lampton TW4 to help you relocate to the area, you can always give Monster Man and Van a call.

The place where the orchards were 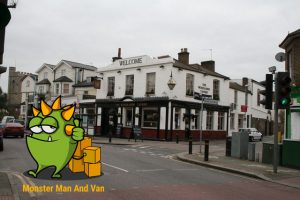 Another pretty peaceful and beautiful residential area that we’d recommend you to check out is Woodlands. Most of it was developed in the 1930s, though one can find older buildings in the area as well.Woodlands Road, Woodland Gardens, Woodlands Grove and St John’s Road are the main streets in this district that distinguishes itself by having some of the best restaurants and taverns in the borough of Hounslow. The Woodlands Tavern pub on St John’s Road is a prime example of this. If you are wondering what to do on a Friday night, or you just feel like going out for a pint at any other hour or day, you will not make a mistake by dropping by.

Woodlands has the benefit of being relatively nearer to Central London, especially in comparison with some other residential districts in the borough. You can also find a properly licensed and fully equipped man and van in Woodlands TW7 which is why moving to this part of the English capital has always been a very easy, budget-friendly and a stress-free experience.

And for those with more refined tastes

Osterley, part of the ancient parish of Isleworth, is certainly one of the most affluent districts in Hounslow. It attracts quite a few visitors because of the National Trust-run Osterley House and park and occupies a strategic position on the Great Western Road (A4) which probably explains why the district has been developing so rapidly and has always been in fashion.

The area is serviced by a very trusted man and van company in Osterley TW7 and as many as three Underground and Overground stations:

The district is indeed quite fashionable and desirable. A true testament to that fact is the recent decision by the Sultan of Brunei to have one of his London residences namely here – the celebrated Aviary Farm in Windmill Lane.

Osterley Park is one of the largest public parks in London today. The construction of the estate and the park started in 1761. The house in the middle of the park is of particular interest to tourists because it is one of the few surviving houses of such grandeur in the capital that were preserved more or less in their original state.

The estate originated in the 1570s as a manor house belonging to notable banker Sir Thomas Gresham. Later another banker, Sir Francis Childs, founder of Child’s Bank, bought the property and commissioned Scottish architect Robert Adam to renovate and expand the house, giving it the grand look you can marvel at today.